BDP 558/568 fluorescence maximum is in the yellow spectrum range (569 nm). This dye is an analog of such fluorophores as BODIPY™ 558/568, Cy3™, DyLight™ 549 by its spectral characteristics. It is soluble in polar organic solvents and has good photostability and high quantum yield.

BDP 558/568 has hydrophobic properties and can be used for staining lipids, membranes, and other lipophilic compounds.

Introduced in the BDP 558/568 molecule, the cyclooctyne functional group allows entering into reactions of 1,3-dipolar cycloaddition with various substituted azides. Such reactions are promoted by ring strain and do not require copper catalysis. Thus, this method can be used for investigating various processes in living cells.

BDP 558/568 DBCO can be used for the detection of target molecules, proteins, or nucleic acids that contain azide groups by microscopy and flow cytometry.

Absorption and emission spectra of BDP 558/568 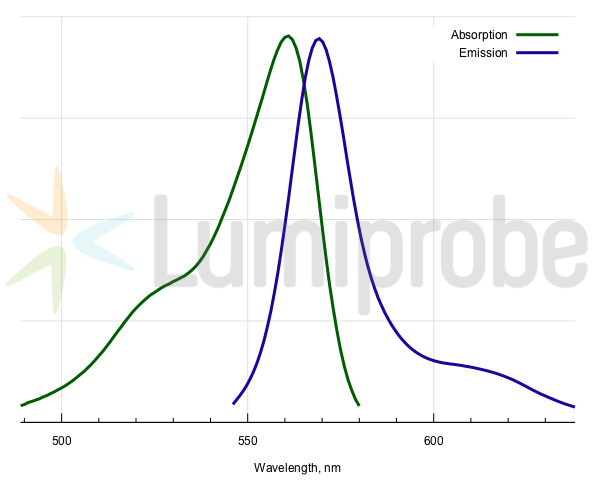 Customers also purchased with this product

Stable fluorophore that can be conjugated with trans-cyclooctene derivatives of biomolecules for their visualization.

BDP 558/568 is a borondipyrromethene dye for Cyanine3 channel. This is a terminal alkyne derivative.

Your item has been added. View your cart or proceed to checkout

The count of items is incorrect.

Your cart is empty

Get your electronic Certificate of Analysis (CoA) online right now:

Learn more about CoA
Newsletter subscribe
Keep in touch with us having discounts and technical information in your inbox.
Prefix
First name
Last name
Email